10 Reasons Why Affordable Robotics is the Future of Labor 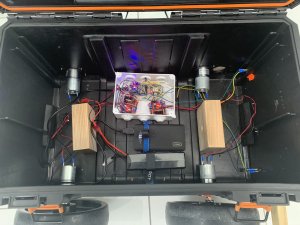 Affordable Robotics has some pretty enticing promises. Many have envisioned a future where robots can 1000x production and remove the simple and tedious jobs from us, yet 99% of robotic startups fail. The few that do succeed tend to only sell a few robots to large companies, in an attempt to make an ROI on their large $10M or even $100M series investments.

After studying the robotics industry through our nearly 10,000 followers on LinkedIn for the last 5 years, most of whom are in the robotics industry, there is one gigantic problem: robots are too expensive. We’ll explain why we believe the industry will start moving away from robust robots to affordable robotics.

There are many great solutions that exist; but in the robotics industry, the hardest problem isn’t creating the robots: it’s finding many people to buy them. For example, we know of a great robot that costs about $1.2M, but we also know of 2 people deeply in this industry who say that no one is buying their robot because the ROI just isn’t there. This is where affordable robotics comes in. We can essentially create similar functionality to their robot, whereas the cost would be only in the thousands.

For those companies that can afford $50K robots, a common problem we hear is that it’s difficult to scale that to address their needs. Arguably the only real way to scale labor is by decreasing the upfront cost.

Companies expect a freemium plan for any investment.

The other major issue is that in the past, it was normal for companies to take out a loan for an expensive piece of machinery to automate labor, and recover their costs over time. Nowadays, though, millennials are more and more requiring freemium plans to test out a solution before they invest. This is especially needed for robots because what oftentimes is advertised doesn’t usually account for the many edge cases in the real world.

While it is difficult to predict every failure case, companies should offer a free trial, and the best way to do this is through affordable robotics. That way, the company can front the cost of giving free trials and the customer is happier.

Integrating libraries is greater than building from scratch.

One problem engineers, especially robotic engineers, are notorious for is building everything from scratch, but this is very dangerous for robot software. There are too many features required for a solution: CI/CD tests, fleet management, drivers, security, lifecycle management, containerization, state machines, business logic, navigation, manipulation, etc. Even the company that manages Google realized this when they recently bought the best robot middleware: ROS.

This shows us that integrating libraries is far greater than building from scratch. Instead of spending millions trying to “rebuild the wheel,” look to what already exists on GitHub, Docker, or the Arduino Library Manager.

An example of how building from scratch usually fails is shown in a recent Amazon failure. Despite the fact that Amazon has a decade of experience with logistical robots, they still failed in their Amazon Prime delivery robot in a way that was obvious to us: Visual SLAM is not robust enough for crowded cities. They likely tried to solve edge case after edge case, but we believe it’s better for robotic companies to focus on integrating existing libraries to save time on unknown challenges.

Affordable robotics also has the advantage of the open-source community. While proprietary hardware tends to require customer support, often of which the support isn’t very good, affordable hardware like the Arduino series has literally thousands of articles written to debug very specific errors and even give new ideas.

Expensive robots are expensive to maintain.

What often goes unnoticed when buying an expensive robot is just how much money goes into maintaining a robot. We know a contact in the construction industry who used to buy many robots to automate labor, yet his biggest problem was that when the robot broke down, the parts were too expensive. With affordable robotics, even when a part would break down, it will cost just dollars to fix, not thousands of dollars.

More than that, large companies create a monopoly on the ability to repair their machines to make extra money, but this is harmful to customers. With affordable robotics, the knowledge to fix it is easily accessible and no one company can force a customer to not repair it because the parts are generally made for anyone to work with.

Expensive parts are difficult to procure.

Affordable robotics also usually doesn’t have a problem finding parts for mass production. We’ve seen many companies that create a robot, but they can’t sell it because one of the 30 parts in the robot is too obscure and currently is out of stock. If companies build their robots out of easily accessible parts, they won’t have to worry about going out of stock because affordable parts tend to have more established assembly lines.

Lifecycles of cheap parts are increasing.

One of the most common rebuttals to affordable robotics is that expensive robots are more robust in the real world, but that isn’t our experience. Even famous companies like John Deere, which sell extremely expensive machines, are famous for their breakdowns. While it is true that stainless steel will outperform hard plastics, for many applications, the better material isn’t needed. More than that, cheaper parts like Arduinos are increasing their lifecycle capabilities to compete with industry standards like PLCs.

Time-to-market is key to success.

There’s something to be said for the basic principle of any startup: “sell before you make.” The quicker you can get eyes on your product, the quicker you can iterate. Instead of spending millions on a product you’re not really sure people will buy, create an affordable prototype.

We believe that the future of robotics is affordable robotics. Customers need the lower cost, there is more community support for software, and recently strides have been made to increase the reliability of part lifecycles, procurement, and knowledge for maintenance. 99% of robotic startups fail, many of them with $10-100M of funding, but this doesn’t need to be the future. If more companies focus in on the wide robotics community, especially ROS and Arduino, then we can all help each other build better robots. If you’re interested in building a solution with an affordable robot, check out our Voidwalking solution.

The 11 Most Affordable Research Robots in 2023
Scroll to top